The surroundings of the “Calanchi di Riosto” belonged in former times to the Riosto municipality with church, cemetery, school and guesthouse. Today you can only find leftovers of the Riosto palace which was destroyed during the Second World War. The area part of the feudal system of the Ariosto Family and from this time on in possession of the ancestors of Ludovico Ariosto. Today, in Via Indipendenza in Bologna, near the Baglioni Hotel, there is a memorial stone which reminds of the asset of the Ariosto Family, residential house and tower. Furthermore, there ist a street named after Ariosto. 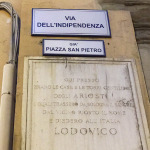 Located between the river valleys Idice and Zena the mountain ranges of Mountain Bibele originated precious relics of an Etruscan-Celtic settlement which are exhibited in the archeological Museum “Luigi Fantini”. The exhibition which contains one of the most complete collections of Celtic objects, is one of the most important in whole Italy. 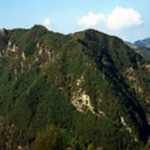 The Savant, The Red and The Abundant: that’s the definition of Bologna, capital of the wealthy Emilia Romagna. The Savant because it’s the location of the oldest university of Italy. Bologna, The Red, for the colour of its roofs, its arcaded sidewalks and its buildings which renders vivid the colours of the Middle Age. Bologna, The Abundant, for its tasty and rich gastronomy: Bologna’s cuisine is well known all over the world and has conquered even the most spoiled palatine. To visit at all costs: The two towers Asinelle und Garisenda, typical symbol for Bologna. Basilica Santo Stefano, complex of religious edifices and known as „The Seven Churches“. Piazza Maggiore, pulsative heart of the city, centre of the commercial and religious life of Bologna. Only Rome can exceed Bologna in the quantity and beauty of innumberable churches. The city is dominated from St. Luca’s hill with its Sanctuary of the Madonna of St. Luca, reassuring visual landmark for Bolognese approaching town. 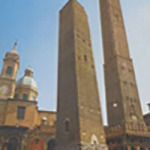 The Etruscan Town Misa in Marzabotto was discovered in the late 1800 and reveals religion, culture and social life of the Etruscans. The relics of this ancient Etruscan city are exhibited in the archeological museum “Pompeo Arie”. 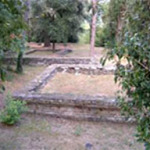 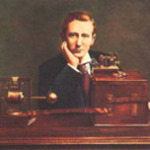 Field marshal Kesserling stipulated near Florence the line of defence, called “Gothic Line” or „Green Line“, using the feature of the Tosco-Emilian Apennine as well as the Ligurian and Adriatic Sea. The mayor point were naturally constructed by the Mountain Pass Futa and Giogo and the Adriatic region, perfect for military attacks. In the Riosto surroundings the German main commandant had taken cantonment.

The Castle was constructed in the late 400 under Caterina Sforza, countess of Imola and Dozza. Besides the visit of the castle, in the basement there is the regional wine store „Enoteca Regionale Emilia Romagna“ which organizes on a regular base wine tastings with local wines, amongst others also our Riosto wines.

18-hole Golf Course, technically challenging, sportful and varying. Located in the amazingly hilly landscape of the Apennine, this golf course meets the expectations oft technique freaks as well as those who love unpolluted nature. 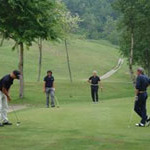 Organisation of wonderful excursions through the Riosto hills under the direction of expert Frencesco De Rosa, adequated also for beginners. Every Sunday from 10-12 am entertainment for our youngest, to introduce them into the fantastic world of horses. 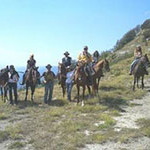 TERME SPRINGS AND WATERPARK (A 28 KM)

The complex „Villaggio della Salute Più“ is an unique structure, which offers to the whole family all over the year health, well-being and relax. The Thermal Park is open all year long, the Waterpark from May to September.

The park includes the whole area where happened the massacre of Monte Sole in 1944. In order to remember this bad happening, this park was founded. The main point is the protection and the upgrading of the cultural heritage and even more the propagation of culture of peace to younger generations. 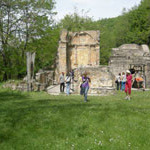 The “Grotto of Farneto” is the most known karst and gypsum cave of the river valleys Zena and Idice. An important prehistoric place which originates in the regional park Gessi and the lime formations Abbadessa. 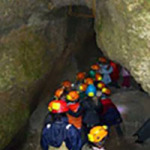 Don’t miss an excursion to Florence, reachable by the highway „Del Sole“ or the famous Futa Pass, historic connection between Florence and Bologna, today known for „Mille Miglia“ and „Bologna Raticosa”, both races for vintage cars. Florence itself has numerous famous places to visit, it’s one of the most beautiful Cities of Art in the world. 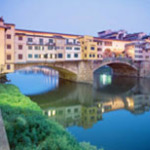 The City Ferrara enjoyed great esteem under the noble family Este, and even today it’s a wonderful example for preservation of harmony and fair balance during centuries. Listed by the Unesco as World Heritage Site, Ferrara is a city founded during the Renaissance and still today it has an intact historic city centre.

Ravenna, city of the mosaics, was three times capital: in the Western Roman Empire (402-476) – in the Eastern Gothic Empire (493-554 p. Chr.) – during the Byzantine Exarchate (568-751 p. Chr.) Due to the relicts of this interesting past, Ravenna is one of the few cities worldwide which can pique itself on 8 sights listed by the Unesco as World Heritage Site. 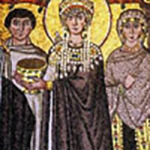 From 1598 Modena has been for centuries, until the access of the Italian empire, headquarter of the princedom Este. Antique place of University, seat of the archbishop and since 1947 headquarter of the academy for military and carbineer. The Cathedral, the Tower “Civica” and “Piazza Grande” have been listed by the unesco as World Heritage Site. 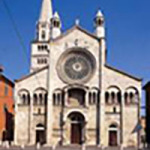 The City Venice was more than one millenium capital of the Republuic Venice, known as the serene one („La Serenissima“). Due to its peculiarity of constructions and the invaluable asset of art Venice belongs to the most beautiful cities of the world, with its Laguna is listed by Unesco as World Heritage Site. 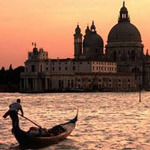 In the winter you can go skiing on 36 km of pistes. In the summer excursions in the regional park “Corno alle Scale”, e. g. along the incredible waterfall “Dardagna”.

100 km of beach for satisfying your desire of relax and fun. The natural sense of hospitality has lead to flourishing international tourism. The “Riviera Romagnola” offers accommodation possibilities of high standard, various entertainment structures, discotheques and leisure parks.